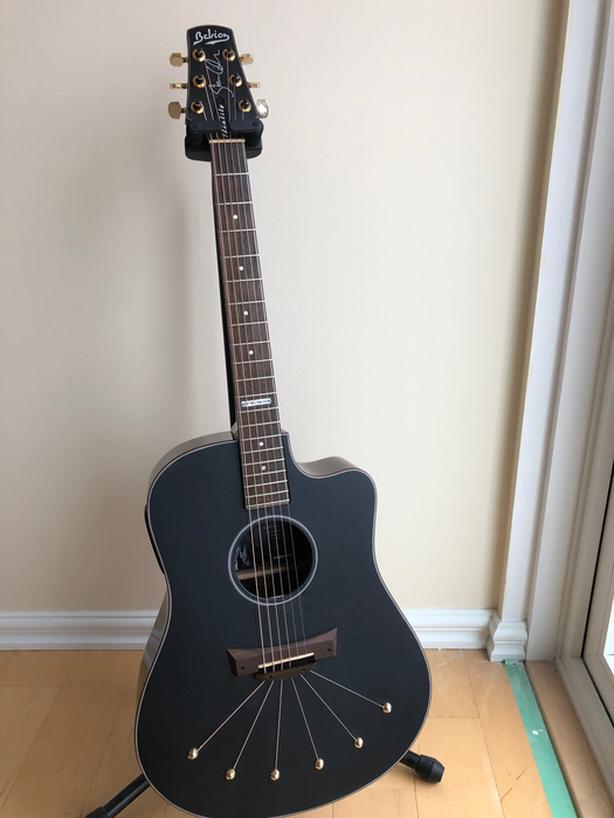 I have never seen another one of these for sale since it was made. I suspect SW super fans like myself have snatched them up and hidden them away. You will probably never see this model again. Seriously. See below.

I pre-ordered and pre-paid for this baby from Babicz when it was first announced and then I had to hound Jeff Carano for two years to get it. Below you see the email he sent me at that time:

I don't think we'll make it in time for your visit here in the states, plus we'll be in Anaheim for the NAMM Show at that time. It looks good for next month and I'll pay for the shipping to Canada.

I'll have an update on this run early next week......again, thanks for your extraordinary patience! This is the very last SW Signature guitar that will ever be built.
~JC

"It's a really beautiful instrument. It sounds good, feels wonderful to play and it looks incredibly striking. I'm very proud to have my name on it"


Steven Wilson - Porcupine Tree frontman, hugely successful solo artist and "king of prog rock"- has long been a loyal and enthusiastic supporter of Babicz guitars, with the revolutionary Identity Series Dreadnought famously being his main acoustic stage instrument for over a decade.

To celebrate, the boldly experimental British artist was invited by Jeff Babicz, one of the USA's most forward thinking guitar builders, to help create a brand new signature instrument.

Based on Steven's preferred cutaway design and engineered to his exacting standards, the result is a striking guitar that combines slick good looks with consummate construction, superior performance and unparalleled versatility, employing the full complement of cutting edge Babicz innovations to maximum effect.

Describing it as "fundamental to the show" this is the exact same instrument that Steven has used in all his live performances since the release of his wildly acclaimed 2015 solo album, the soulful and immersive masterpiece "Hand. Cannot. Erase."